Posted on: 19 June 2020 by Lorna Sergeant Collections and Exhibitions Officer in 2020

This week the object in focus is our small but important collection of Scrimshaw. Scrimshaw is the name given to a handmade craft created by sea faring men, usually whalers who carved and etched the teeth and bones of whales and other marine mammals. They are often very beautiful. The craft came out of the mariners having a lot of time on their hands while out at sea. Particularly whalers, waiting for a catch. It is thought the word “Scrimshaw” is derived from a mix of Scandinavian, Dutch and English slang for 'wasting time' or 'state of idleness'. Whaling voyages could last 3, 4 and sometimes 5 years and there would be long periods of time with nothing to do and so “scrimshandering” became a popular pastime which kept men occupied and out of trouble. Scrimshaw was most popular in the early 1800s when the whaling industry was at its peak; by the late 1800s this art form had almost died away.

It was not just whalers out at sea that created these intricate art works though. Our collection of Scrimshaw  has pieces that were created by captured French sailors. During the Napoleonic Wars, many French sailors were captured by the Royal Navy. Large numbers of prisoners were brought to Liverpool, well away from the channel ports. Once captured French sailors and soldiers were imprisoned in Liverpools first jail (dating back to the 15th century) the Tower of Liverpool which was then situated in Water Street.

The Tower of Liverpool
Water Street

Many sailors were particularly creative and dextrous and were actively encouraged to produce decorative items from animal bone and whale teeth that could be sold to supplement their keep. The making of scrimshaw also passed time in what were horrendous prison conditions.

Making Scrimshaw
Sperm whales develop some 18-26 pairs of large, roughly conical ivory teeth in the lower jaw which fit into sockets in the empty upper jaw. Other sea mammal ivories would also be used such as walrus tusks. After extraction from the gum the teeth were filed or scraped smooth and carefully polished with shark skin, pumice or wood ash. Then the design could be pierced, drawn, carved or engraved onto the surface using a sailing needle or sharp blade. The designs and pictures that were etched into the tusk or tooth were then brought out by rubbing soot, candle black or tobacco juice into them eventually rubbing ink and carbon was used and later coloured ink. The excess would be buffed off and polished to reveal the intricate or simple design depending on the artists ability.

Stories and themes depicted in scrimshaw are often related to seafaring experiences. Depictions of the sea, ships myths and legends feature. They also depict important historical events including naval engagements during the Napoleonic wars. Often portrayed were fashionable ladies (see the example below) sometimes with gentleman or in this case two ladies together and reading or perhaps discussing a passage in a book? Who these ladies are we don’t know, perhaps they are an imprisoned makers sister, or wife and companion? Or could the maker have copied an image they had seen elsewhere?

The walrus tusk below is engraved with an image depicting a lady beneath a tree representing longing and fidelity along with a sailor and a large dog outside a fortified building – possibly the prisoner and the Tower of Liverpool. 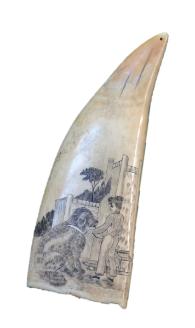 Engraved Sperm whale tooth depicting a story on both sides

The scrimshaw below tells a more violent tale depicting the profile of a lady and two Frenchmen fighting a duel – presumably over her. It is engraved on a sperm whale tooth according to our records it was engraved by a Frenchman, a prisoner of war during the Napoleonic Wars in the tower of Liverpool. 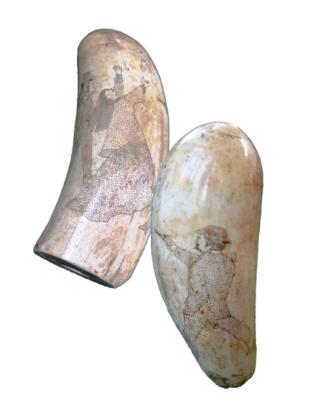 Early pieces of scrimshaw do not have inscriptions or signatures because many of these talented men could not read or write, so some of these pieces of art were not usually signed or dated. These examples of scrimshaw are part of our dental collection.

I think they are very beautiful and tell stories of dramatic lover’s duals, loneliness, fidelity and imprisonment. The tusks and tooth’s themselves tell the stories of the sailing men who created them and can be seen in the current exhibition The Errant Muse. Whether they be whalers on their whaling ships far out at sea or French naval officers incarcerated on land they all had time on their hands and used it to produce these wonderful decorative artworks.