There's a Gorilla in the Museum!

Until recently, one of the specimens that desperately needed conservation was this gorilla skeleton - which had been taken apart for research - and repairing it was way beyond our in-house skills.

She was a female Eastern Lowland Gorilla names Noelle, who lived at Chester Zoo from 1960 until she died of natural causes in 1975. After a pot-mortem was carried out, she was donated to the University and her skeleton was reconstructed in the Anatomy department so she could be used for teaching, but by 2020 she hadn’t stood the test of time and needed a lot of conservation work before she could be part of our Natural History redisplay in the Tate Museum.

Lucky for us, Leonie Sedman our Curator of Heritage & Collections Care, managed to secure funding from the Bill Pettit Memorial Award, which gave us the opportunity to employ specialist conservator, Nigel Larkin to undertake the extensive work necessary to put things right. Read more about Nigel's work here.

In the final week prior to the museum closure, we took delivery of the beautifully conserved Noelle – and installed her in her new home.

How do you conserve a gorilla skeleton?

What was obvious was that Noelle required putting back together, she needed a new mount, and her pose was to be re-set. Noelle was in pieces in a large box without a mount when Nigel the conservator came to collect her, all the bones needed cleaning and consolidating, and the wires and pegs that held the bones in place had become lost, bent or misshapen and needed replacing. We decided on a new pose that was natural for her species and skeleton type. Nigel built the new mount and worked on the skeleton to look like the diagram below.

The metal support under the vertebrae was made out of steel shaped on a forge and this inserts into an upright steel tube that has been welded to a base plate with holes for screws, which secure into the plinth base.

The wires holding the rear legs in place were replaced with a short, thin threaded bar at the top of each femur in the femur head, which then attached to the pelvis with a washer and a nut. This required drilling into the head of each femur, gluing the threaded bar into position, and drilling through the acetabulum of each pelvis - but the result is a much sturdier and more natural pose.

Previously the skull had been attached to a metal peg held in place with thin wires at the back of the skull. This armature was remade and now holds the skull in place looking directly ahead, rather than down to the floor. To hold the ribs in place, thin twisted, galvanised wires have been used.

Finally, a plinth was made for Noelle to stand on and for the metal base of the mount to be screwed to. 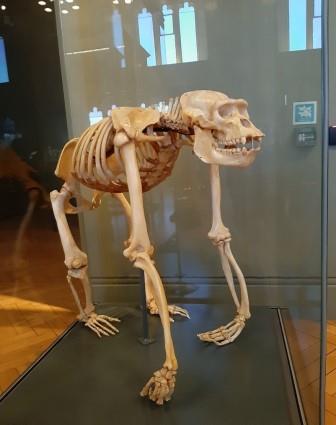 We would like to extend a very big Thank You to NatSCA and the Bill Pettit Memorial Award for funding the Project – and to Nigel Larkin for his great work making Noelle look spectacular!