In Celebration of Hagfish Day!

Most people agree that one of the most repulsive specimens in our Nightmares in a Bell Jar display is the hagfish – but this doesn’t mean that hagfish don’t deserve our attention and protection. That is the message behind Hagfish day, which is on the third Wednesday of October – every year.

Although hagfish are sometimes called ‘slime eels’, they are not eels - and despite their name, as they lack jaws, stomach or fins - there is some debate about whether they are even strictly fish. When Carl Linnaeus first encountered one in 1754, he originally classed it as a worm. The specimen below is in our Nightmares in a Bell Jar display. 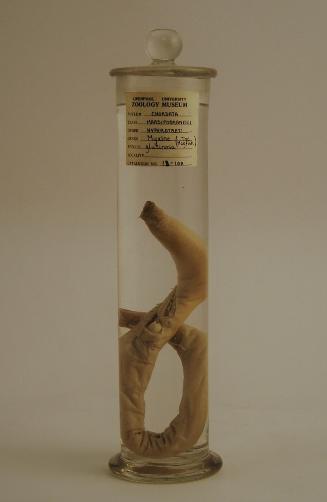 Hagfish from the VG&M
Hagfish are unique in that they are the only known creatures which have a skull but not a vertebral column. They have traditionally been thought to belong to a much more primitive lineage than any other group that is commonly defined as fish, however new research based upon fossil findings suggests that they may not actually be an evolutionary throwback – but may have evolved over 300 million years to adapt to their highly specialised lifestyle, and then remained virtually unchanged for up to 100 million years.

Tethymyxine tapirostrum, a very rare 12-inch-long,100 million year old fossil in a slab of Cretaceous period limestone from Lebanon (Photo: Tetsuto Miyashita, University of Chicago). Believed to be the first detailed fossil of a hagfish.

Their unusual feeding habits and slime-producing capabilities have led members of the scientific and popular media to dub the hagfish as the most ‘disgusting’ of all sea creatures.

Shall we investigate this claim?

They can feed themselves by simply resting inside a corpse and absorbing the nutrients directly through their skin – in fact their skin is even more efficient at absorbing nutrients than their own intestines. You could say that they were like the vultures of the sea – but at least vultures wait for their dinner to be dead before they start eating it – not so the hagfish, which sometimes latches onto live prey, then ties their tail into a knot to generate the necessary torque to burrow inside and eat the victim alive from the inside out.

As a defence mechanism, when attacked or stressed, an adult hagfish can secrete enough slime to turn a large bucket of water into gel in a matter of minutes – they actually only excrete about a teaspoon of mucous, but within half a second, that amount will have expanded by 10,000 times - enough to fill the bucket. They then clean themselves by tying themselves in their special overhand knot which works its way from their head down to their tail, scraping off the slime as it goes.
The unfortunate result for one driver when a lorry carrying hagfish shed its load in Oregon in 2017

But there is another side to the hagfish

By consuming the dead and decaying carcasses on the ocean floor, hagfish play an important role in cleaning the ocean floor and recycling nutrients, helping to maintain the overall health of the ecosystems they inhabit - and thereby creating a rich environment for other species including commercial fish such as cod, haddock and flounder. This is why they have sometimes been called ‘the janitor of the sea’.
Overexploitation and destructive fishing practices are major threats to hagfish species in many geographic regions - even though the loss or decline in their population will have a detrimental effect on the ecosystems and the fisheries that depend on them. Because of this, hagfish are a perfect example of an outwardly unattractive species that plays a vital role in the protection of ocean ecosystems, but no current conservation measures or legislation exist to protect their populations.
See the links below to discover more about this most misunderstood of creatures:
https://www.pnas.org/content/116/6/2146
https://www.wired.com/2014/11/creature-feature-10-fun-facts-hagfish/
https://www.youtube.com/watch?v=t5PGZRxhAyU
https://www.nationalgeographic.co.uk/animals/2017/11/slime-eels-explode-highway-after-bizarre-traffic-accident 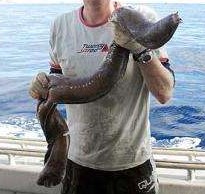 A scientist holding a large hagfish