Posted on: 10 July 2020 by Lorna Sergeant Collections and Exhibitions Officer in 2020

This peculiar looking ceramic has always intrigued me ever since I started working here at the VG&M. At first glance I thought it was a ceramic by world famous artist Pablo Picasso whose ceramics were often influenced by Latin American and pre-Columbian forms but on closer inspection it was not. 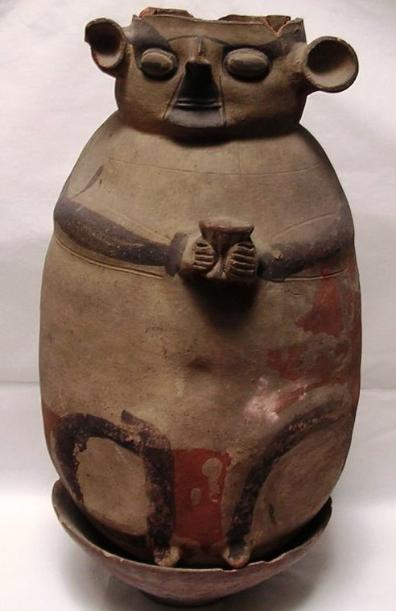 This Latin American Ceramic stands at the top of the second-floor stairs almost like a guard of honour before you step into the Tate Hall. I often say good morning and good night to it as I arrive and leave. You develop a certain fondness for collections during your working day!

I think this funeral offering or effigy jar as they are often known is magnificent in its simplicity. Egg shaped, anthropomorphic features, terracotta earthenware, decorated with a cream slip background, with arms and legs painted in dark chocolate pigments. The face has protruding coffee bean shaped eyes that stare out at you as you ascend the stairs, a snub nose, large sticky out ears reminiscent of Shrek apparently…according to my niece! A dark brown mask covers the eyes and a strong beard can be seen just under the nose and the mouth.

The body has arms that cross the belly and hold a cup or what is known as a small offering of a Kero (a beaker type receptacle) that would have held a drink called chichi- which was a fermented drink made form corn otherwise known as corn beer. So who made this and why did they make it? 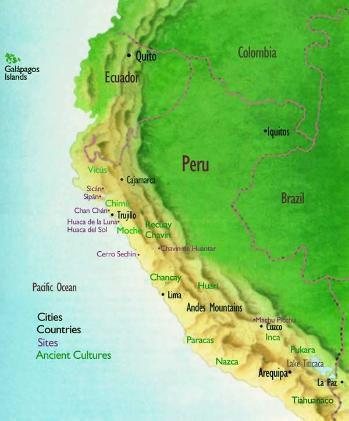 Chancay was one of the first pre-Incan cultures situated in the central coast of Peru (around modern-day Lima area) between the years CE 1200- 1470 until they were eventually conquered by the Incas. The central coast is largely desert area but it did and does still have fertile valleys and rivers. The Chancay used the land and valleys as farmland and with the ocean close by fishing was an important way of life and a good source of nutrition.

The civilisation is known archeologically for their ceramics and exquisite vivid textiles, such as this funery mantle border.

The production of textiles was very extensive and many pieces survive today. This is largely thought to be due to the quantities and quality of textiles that were produced. Llama wool, cotton and even feathers were used to create the textiles. With geometric and anthropmorphic figures created in the weave of funerary cloths which were thought to hold supernatural powers.

The Chancay ceramics are very distinctive for their black and brown decoration and they are thought to be of a poor mass-produced quality as the red terracotta often comes through which can be seen with our offering. They produced ceramics using large scale moulds in two parts, usually vessels made for daily use such as holding liquids, cooking pots, dry goods storage and for funeral offerings such as this.

The function of the funerary offering is not fully known; however, archaeologists are agreed that this type of modelled jar most probably represented the occupant/s of the tomb it was found in. Ritual objects, such as offerings of food and beverages were most likely placed inside, along with skeletal remains and small mummy bundles. These offerings like the funerary textiles were thought to have supernatural powers and were most likely made to ward off bad spirits and serve as guardians for the dead.

This has a rounded base and would have been set upright pressed into the sand with its tiny feet level with the ground so it looked like it was standing.

Standing guard as it does today at the VG&M like a masked historic superhero protecting us in our daily work.