The Way of the Gull

It’s the start of National Marine week tomorrow. In celebration, we share the coastal landscapes of Dr Margery Knight (1889 - 1973). Five of Knight’s paintings are in the VG&M collection, bequeathed in 2003 by her companion, Miss Rose McKenna. Last month, Knight’s paintings inspired the VG&M relaxed concert, 'Time was away and somewhere else'. We reached out to Louise Ashcroft, who wrote and performed the concert, to share insights. Over to you, Louise…

Wish you were here

Two landscapes entitled The Sound by Margery Knight, oil on board, date unknown, © The Copyright Holder

At first glance, Knight’s landscapes in the VG&M collection are picture postcard perfect. Taking in some of the famous natural wonders in the Isle of Man, like The Sound featured above, Knight’s landscapes have just the right amount of mystery and beauty to inspire the words, ‘wish you were here.’ I was brought up on the Isle of Man. I’ve walked the hills and coastal paths featured in Knight’s paintings. Why then, when I look at her paintings, do these familiar places also seem unfamiliar?

In pursuit of perspective

Right: The Sound by Margery Knight, oil on board, date unknown © The Copyright Holder

Take for example, The Sound, a much beloved view-point at the southernmost tip of the Isle of Man. As depicted in the photograph above, you can spend hours staring out to sea and find refuge in the café for a scone and cup of tea. The Sound Café was in existence when Knight was working and living on the island. Whilst a cup of tea and a nice view is my relationship to The Sound, it isn’t necessarily Knight’s. Compare the photo to her landscape, with prickly gorse in the forefront and the ratio of nature to man, there’s a grit to her perspective that hints at something else entirely. So, what is she seeing?

There isn’t a wealth of biographical material on Dr Margery Knight. In this respect she is similar to the composer, Franz Schubert; you have to find her in her work. 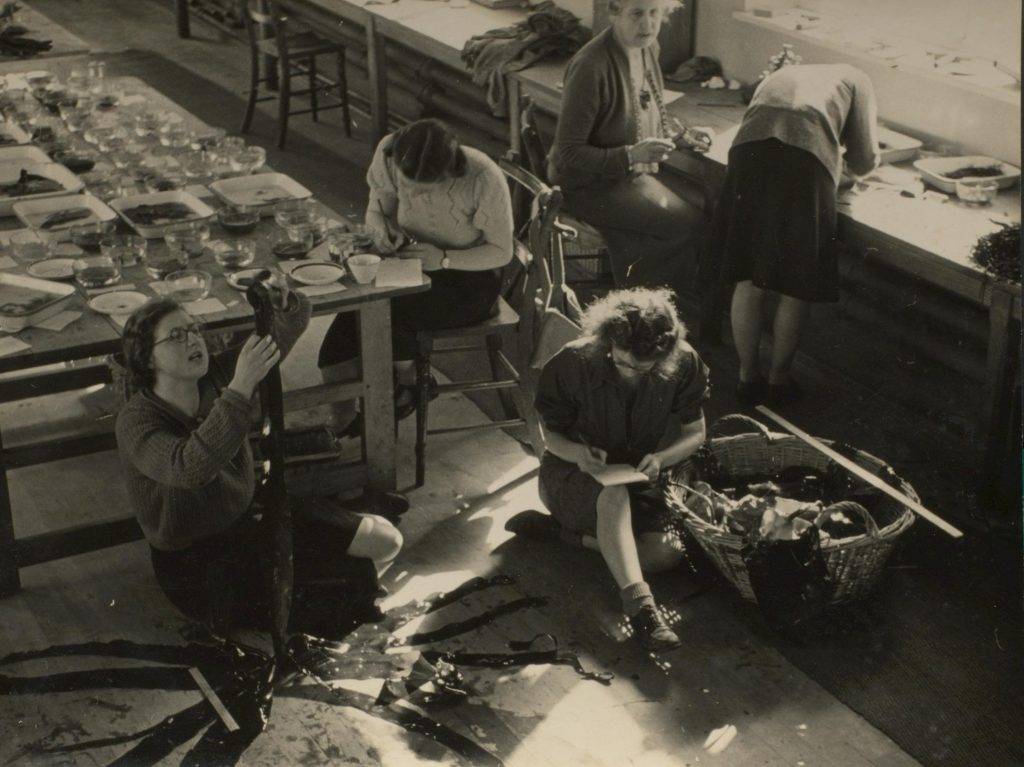 A botany lecturer and seaweed specialist at the University of Liverpool from 1912 – 1954, Knight was predominantly based at the Port Erin Marine Laboratory on the Isle of Man. Here, Knight and her students were often seen clambering over rocks in search of seaweed, even after Knight lost her leg in a car accident in 1936.

During the interwar years (1918 – 1939) and the post war years (1945 – 1960s), there was a surge in phycology research (study of algae) of which the University of Liverpool was at the forefront of. During this period, Knight’s meticulous approach, her work on chromosome numbers and life histories of algae, inspired and directed a group of pioneering thinkers who would become the future leaders of phycology. In 1931, Knight and her student, Mary Parke, published their findings on Manx seaweeds in the ‘LMBC Memoirs’ series.

Manx Algae by Knight & Parke (1931). Courtesy of and © University of Liverpool Press. Initials on the botanical illustrations read M.K.

At the back of the book is a treasure map of sorts, indicating the best locations to study seaweed. Hold the map up against the oil paintings in the VG&M collection, and it’s a match. 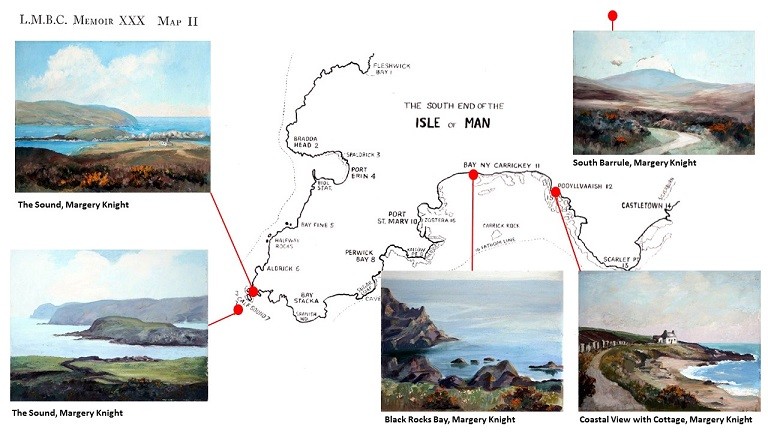 Research document from Time was away and somewhere else: Map II from Manx Algae by Knight & Parke (1931), © University of Liverpool Press superimposed with Knight’s paintings in the VG&M Collection. Location suggestions are best estimates.

South Barrule, the highest hill in the south of the island, has been included. Whilst it isn’t one of Knight’s seaweed locations, it offers a bird’s eye view of them. For from its summit on a clear day, the south end of the Isle of Man stretches out below you like a map.

Knight’s landscape paintings in the VG&M collection might be picture postcard perfect, but beneath the surface they serve as shadow boxes, capturing the sacred spaces where Knight communed with her thoughts and ideas.

Elements of style and the reveal of character

“The present Memoir embodies the results of a systematic survey of the algal flora of the south-east corner of the Isle of Man... In making the survey careful notes have been kept.” Knight and Parke, Manx Algae

Precision echoes in Knight’s work as a botanist and artist. The clarity and accuracy of her botanical illustration is also present in her oil paintings. For example, in Black Rocks Bay featured above, she gifts us with a clear space that invites us to stop and stare.

What are the odds? Every time I’ve visited The Sound, regardless of season, and let’s set the frequency at once a year over the last 30 years, I’ve always come across a fellow traveller. So, I was struck that in Knight’s painting, The Sound, the human is personified by a dwelling place. This idea is repeated in Coastal View with Cottage.

Detail from The Sound (left) and Coastal View with Cottage (right) by Margery Knight, oil on board, date unknown © The Copyright Holder

In these landscapes, it seems like the building serves as a shelter from the vastness of the evolving landscape. Knight’s use of light and dark illuminating man’s fragility further.

iii. The power of now

All of Knight’s paintings in the VG&M collection are united by their use of time. Specifically, the resilience of the present. Each landscape, a mindfulness exercise in itself, offers present awareness. Indeed, this idea is echoed in a conversation between NA Burge (University of Ulster) and the VG&M when discussing Knight’s approach to life:

“[She] belonged to a world in which the concept of ‘gracious living’ was very real, embracing not only the material things of life but manners, thoughts and actions. No time for self-pity…yet no student who was in real need went away without help.” (Extract from VG&M artist notes)

Stepping into the canvas

Two stills from the VG&M relaxed concert, Time was away and somewhere else by Louise Ashcroft (2020), mixed media.

VG&M’s relaxed concert, Time was away and somewhere else, leans into these discoveries. My response was inspired by Joseph Cornell’s shadow box work where places and ideas are shared through the assemblage of objects. Using film as the form, Knight’s paintings are layered with Manx folk songs, dialect poems and botany extracts to reveal the culture that echoes through its landscapes. Stories of home, of adventure, of resilience and love.

In the relaxed concert, time converges at 0:29 and we find Knight in her work. 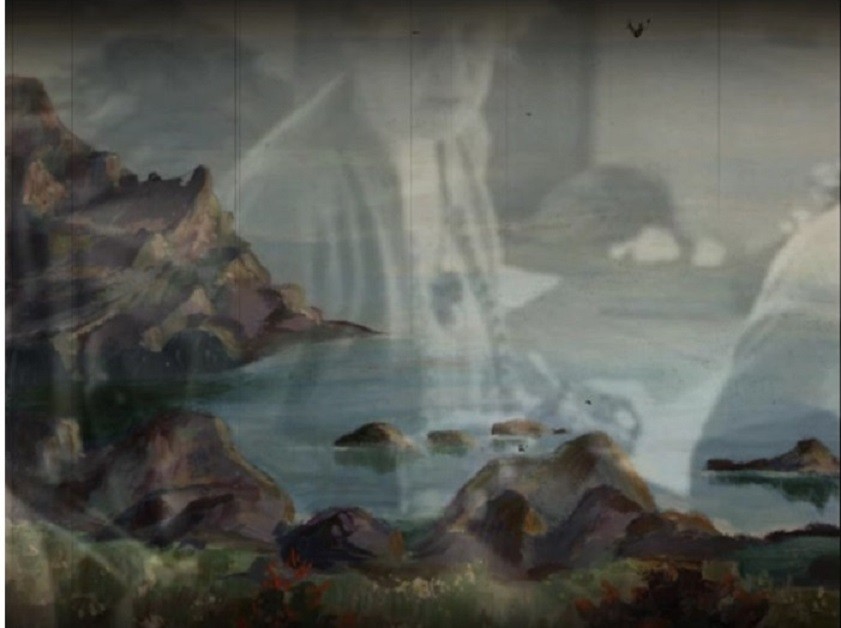 A still of the VG&M relaxed concert, Time was away and somewhere else, by Louise Ashcroft (2020), mixed media.

Knight retired to the Isle of Man in the summer of 1954 from which point she concentrated on her art. In this layering, where she looks back at us through her painting, Black Rocks Bay, we see her united as artist, botanist, lecturer. The moment passes. I recall a quote by Julia Cameron from The Artist’s Way and wonder if Knight would concur?

Attend a relaxed concert
Time was away and somewhere else
15 mins armchair adventure, part of the VG&M Culture Bite concert series

Or visit a virtual art gallery