Posted on: 8 May 2020 by Lorna Sergeant Collections and Exhibitions Officer in 2020

Today it will be 75 years since the guns fell silent at the end of the second world war in Europe. Years of carnage and destruction had come to an end and millions of people took to the streets and pubs to celebrate peace, mourn their loved ones and hope for a better future. Three months after the war had ended in Europe, just over 37,500 British Far East Prisoners of War (FEPOW) were liberated from camps and made the long-awaited journey home. One of these men was British Army Captain Reginald Newman from Powys Wales.

This is a handmade booklet currently on display in our special exhibition Secret Art of Survival - Creativity and Ingenuity of British Far East prisoners of war, 1942 – 1945. When Captain Reginald Newman was imprisoned at the Kuching prisoner of war camp in Borneo during the Second World War, he spent three years doing hard labour and surviving on a cup of rice a day.

When he had spare time, the Captain began creating meticulous plans for a luxury two-berth dream caravan. The design is hand drawn and written on salvaged envelopes and paper bound together to make a small booklet or notebook. 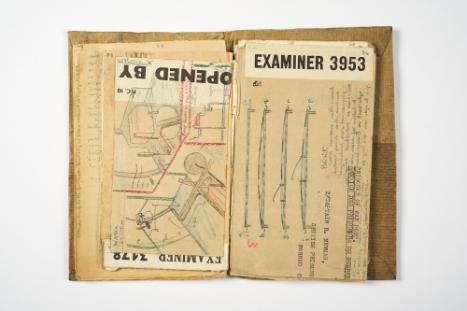 Artworks, writing, diaries and technical drawing were made secretly, the paper would have been kept hidden including the materials they were made with. This would have been kept a secret from his Japanese captors. Captors forbade the keeping of any records, if found the creator would be punished or risk death.

Newman’s designs outline every element of how the caravan would be constructed including materials and lay-out. He specified how the caravan should be made from a steam-curved ash wood frame, have curved leaded windows, a plywood roof, electricity, plumbing and most important of all be lightweight.

Before the war Newman was a civil servent he had no experience in plumbing or electrics yet in this notebook there is detailed plans of how the caravan should be wired and plumbed. Janet Fursier (neé Newman, the artist’s daughter) explained how her father - a civil servant with no plumbing or electrical knowledge - came to learn so much during his time at the POW camp and said:

"The officers ran an undercover university as a way to keep their minds off what they were going through. It operated secretly within the camp as formal meetings were banned, and the men would hold a pack of cards to make it looks as if they were playing cards when the guards came around.”

Every feature has been thought about in minute detail including measurements, towing attachments, the weight of every component and accessory, right down to the type of hinge that should be used where required. Door handle types were specified, light fittings, jacking systems, floor coverings, it’s all there.

Here we have general fittings, wardrobe fittings to accommodate a “rubber coated rail for 6 hangers each”, taps, wire containers, a washing up rack and even a toiletry and medical cabinet with a “mirrored front for shaving”.

What strikes me the most about this amazing notebook is the emphasis on simple comfort. The comfort he must have longed for and hoped for in the future. The prospect of having a full larder to create a nice supper or have a cup of tea on the fold down table. Fresh running water to have a shave. Cleaning materials to keep the caravan spick and span. This is not just "A Plan of a Dream Caravan" it’s a dream of another life created by Newman to take him away from the horrendous conditions he was imprisoned in. These details are important as they focus the mind for many hours at a time. The creation of this project must have given Newman self-worth, identity and purpose.

The fitted kitchen and dining area are shown in great detail with the focus on a kitchen sink and gas-powered hob mod cons one could only dream of in a pow camp. Most notable is the full larder with a bread bin and wire rack for vegetables, food items he must have craved and longed for.

Converting the caravan to accommodate four is also well thought out with the addition of an awning. Perhaps the hope of a family in the future? The passage titled Decorations in particular is very touching he is focusing on the use of colour and how it can create ambience.

A long passage on decoration above

To create this notebook of a 'Dream Caravan' must have been a source of hope for the future and an aid to Newman’s survival. The fact that Newman risked death to produce this amazing work, shows an act of positive defiance against his captors. Without a doubt this must have strengthened his self-respect and will to live.

Newman was single during the time he was creating the “Lightweight” caravan but later married Betty Bonnell, the sister of his friend Frank who sadly died during the war. The notebook was discovered by his daughter after his death.

Newman never got to build his dream caravan but in 2016 it was constructed for George Clarkes Amazing Spaces TV programme. Much to the delight of his family and those who knew him.

The caravan is currently residing in his daughters back garden.