Posted on: 17 July 2020 by By Lorna Sergeant Collections and Exhibitions Officer. in 2020

When you think of graduation the first thing that will spring to mind is undoubtedly the hard work you’ve put in over the course of your studies. You may also conjure up images of the raised mortar boards in celebration, the ceremony, speeches and procession and no doubt the nerves prior to stepping up onto the stage willing yourself not to trip! The likelihood of remembering the University mace is probably quite slim.

The mace has a particular ceremonial meaning, today is an appropriate day to focus on this significant object. The University Mace -an ornamental club with distinctive shields and coats of arms- is used only in graduation ceremonies and is carried by the macebearer in front of the academic procession. The mace symbolises the authority and independence of the university. Many universities, in the UK and around the world, have a mace - it is an essential part of official ceremonies, serving as a physical representation of the authority of the institution.

The Univeristy of Liverpool's ceremonial mace

This amazing bit of bling is just under four-foot-long, sterling silver with a gilt cup shaped head, heraldic crown and surmounted by monde and cross. It was crafted in the early 20th Century 1907-1908 by the prominent silver smith Elkington & Co of Birmingham. Elkington received various royal warrants of appointments including an Imperial Royal Warrant of Appointment form the Austrian emperor.

It was commissioned by Dr Richard Caton on the occasion of his mayoralty. He was Professor of Physiology from 1872 and his work was crucial in discovering the electrical nature of the brain, which laid the groundwork for the discovery of the alpha wave activity in the brain. He became Pro-vice-chancellor of University of Liverpool 1921-4 and was also Lord Mayor of Liverpool (1907–08).

It is said that he was to have been “one of the most beloved professors of the University.” A mutual sentiment reciprocated by Caton in the inscription around the rim of the crown reading: 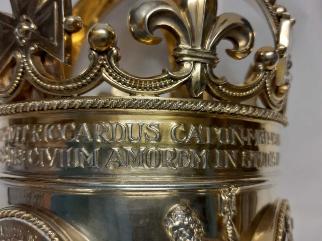 This roughly translates as:

“The entire University body gave Richard Caton medic and doctor: Design the chief civic leader//retired professor: in the love of his citizens as well as the knowledge of the study of humanity, testified.”

The intricate design of the mace holds symbols and meaning to the university and the advancement of learning in its design. There is a royal coat of arms at the base of the crown. 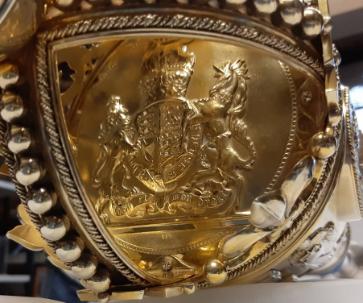 The Univeristy of Liverpool roundal

There are an additional four small enamelled shields of the coats of arms of the United Kingdom: England, Scotland, Ireland, and Wales, with the monogram of Edward VII in the centre. The roundels are interspersed with relief figures of four Greek gods: Poseidon god of the sea; Athena goddess of wisdom; Asklepios god of medicine and doctors and Themis the personification of divine order, fairness, law, natural law, and custom.

The four shields of the United Kingdom: England, Ireland, Scotland and Wales

Beneath there is a relief encircling the base of the head consisting of sheaves of corn and fish and then acorns and oak leaves.

These symbolise longevity, humble beginnings, patience, power, endurance and strength all these combined show the force of faith. The long handle is embossed with a spiralling band of stylized roses extending to the boss at the base. On the underside of the base is a 1908 half-crown, which spins on a central axis and bears the head of George VII on the obverse and the coats of arms of England, Ireland and Scotland on the reverse.

A permanent fixture at graduations, the Mace has become an integral part of the ceremony and a symbol of the achievement’s students have made. The University of Liverpool Mace will be ready and waiting for your graduation ceremony in all its grandeur and craftsmanship in 2021.

Today your degree will be officially conferred in absentia. We are sure you will celebrate your achievements safely at home and take part in the unique Class of 2020 online event organised for you.