Story of the Willow Pattern

Blue and white ‘Willow Pattern’ tableware is considered traditionally British, seen on plates, dishes and tea services on dressers and sideboards across the land. The pattern is clearly inspired by China, and its story certainly starts there, but we need to go back a long, long way to find out why.

The fine ceramic we know as porcelain was invented by the Chinese around 2,600 years ago. Made from a kaolin clay mixture, it was a clear white colour which could be made so fine it was almost translucent. By the 1300s cobalt blue pigment was being used to create designs on white porcelain wares, and blue and white Chinese patterns were born.
Chinese Ming Dynasty porcelain jar, c.1600 (VG&M Collection)

Europeans could only make ceramic items from brown clays so, when delicate blue and white Chinese porcelain wares began to be imported in numbers in the early 1600s, they caused a sensation. The cargoes were so valuable they were known as ‘white gold’. European makers kept trying to re-create porcelain but they couldn’t replicate its white kaolin clay mixture.
Dutch Delftware plate of tin-glazed earthenware with Chinese-style figures, 1700s (VG&M Collection)

As they couldn’t figure out how to make porcelain, British and Dutch makers tried another approach. They covered their local brown earthenware with a white tin glaze decorated with mainly blue designs, very often with Chinese-style motifs. From around 1620, the main centre of production was the town of Delft in the Netherlands, and this type of blue and white ware became known as Delftware wherever it was made. Eventually, the German factory of Meissen found the secret of producing porcelain using locally-sourced kaolin in 1710 and other European makers rapidly followed, but it didn’t dim the desire for real Chinese porcelain.
Qianlong period porcelain teapot made for export, c.1760. Body made and decorated in China then gilded in England. It shows the type of design which inspired the Willow Pattern (VG&M Collection)

And what of the Willow Pattern?

All through the development of porcelain the attraction of the simple combination of blue motif on white continued. Although more Western designs developed, Chinese-themed patterns endured. These were often elaborate, containing buildings, bridges, trees, figures, birds and floral elements set in waterside location and surrounded by a decorative border. They were based on original Chinese designs usually described as ‘estuary scenes’.
Not all blue and white wares are Willow Pattern though. That specific design is believed to have been originated by Thomas Minton for Thomas Turner’s Caughley factory in Shropshire around 1780. Minton then moved to the Spode factory, Staffordshire, in 1784 and they started using the design. Willow Pattern has set characteristics.  It features a pagoda structure, three figures on a bridge, a figure on a boat, two flying birds and, of course, a weeping willow tree.
Early Willow Pattern dish in Devonia shape by Spode, c.1800 (By kind permission of the Spode Museum Trust)

The design is thought to have been inspired by a Japanese fairy tale called The Green Willow and Chinese variants of it which tells of two thwarted lovers. Then, in 1849, an article called ‘The Story of the Common Willow Pattern Plate’ was published in The Family Friend magazine. It set out a narrative that has become the standard interpretation of the pattern.
Illustration and explanation  of the Willow Pattern from Mee & Thompson: The Book of Knowledge (Children's Encyclopaedia), 1912. (Creative Commons image courtesy of Sue Clark)
The story tells how Koong-se, the beautiful daughter of a wealthy Mandarin, fell in love with Chang, his low-born assistant. When the Mandarin found out he banished Chang and built a great fence around his property to keep his daughter in and Chang out. The Mandarin arranged a betrothal for Koong-se with a rich and powerful Duke, who arrived by boat carrying a casket of jewels as a marriage offering. While the Mandarin and Duke got drunk together, Chang broke into compound and escaped with Koong-se taking the jewels. The Mandarin, Duke and one of his men gave chase but the couple got away. They ended up living happily on a far away island where Chang made a successful living as a writer. In fact, he was too successful and his fame reached the ears of the Mandarin. He sent his henchmen over to the island where they killed Chang and set fire to the house, killing Koong-se who was inside. The Gods, seeing their plight, immortalised them as two doves which you can see flying together at the top of the Willow Pattern.
Other elements of the story such as the Duke arriving by boat, three men giving chase over the bridge, and even the far away island can be seen in the pattern. 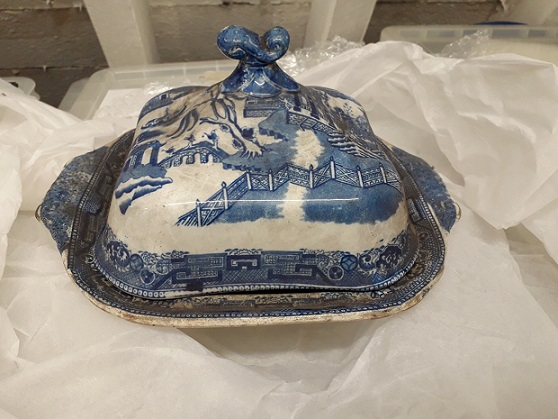 Willow Pattern tureen unearthed from the VG&M stores. It has since been cleaned. Attributed to Ridgeway, c.1910

The Willow Pattern gets mass-produced

Meanwhile, the ceramics industry in Britain evolved very quickly.  A way of transfer printing patterns onto plain white wares had been originated here in Liverpool in 1756. It allowed highly complex designs, such as the Willow Pattern, to be put on items quickly and cheaply, usually on white or cream glazed earthenware.
By the late 1800s many British ceramics companies produced wares with some variant of the Willow Pattern, and it remained popular with buyers throughout the 1900s. Sadly, it is less fashionable at the moment but the Churchill company in Tunstall, Stoke-on-Trent still produce a range called Blue Willow Sandringham.
A display about the Chinese influence on the Willow Pattern can be seen in our Gallery 1 when we re-open.