This week we celebrate #InternationalWomenInEngineeringDay and in our ‘A New Beauty’ exhibition we explore the evolving ways that physical attractiveness was depicted from the late 1800s and while women were being depicted as delicate and otherworldly creatures in art, real women were beginning to demand emancipation and equal voting rights.

The press labelled them as the ‘New Woman’ from 1894 onwards and a year later satirical performances based on the occupations of women were performed in the Victoria Building and this blog looks at two of them in more detail.

The perception of the ‘New Woman’ at University College Liverpool 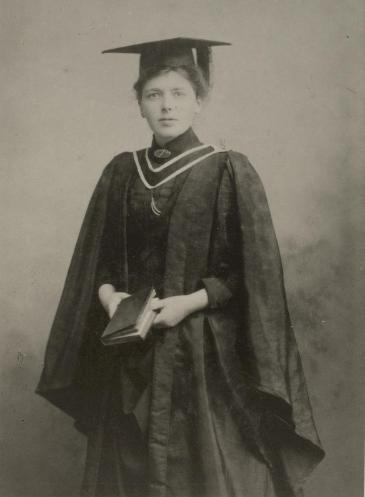 University College Liverpool student Elizabeth Beckett at her Graduation in 1888.

The late 1800s were a difficult time for many female students as they’d been subjected to verbal and physical violence at other institutions, but at University College Liverpool, women had been awarded degrees from 1888 as we have records for Elizabeth Beckett who obtained both a BA and returning for her MA after she was married.

The ‘New Woman’ was often an object of ridicule in the press and popular fiction. She was generally middle-class and characters included social reformers, popular novelists, suffragists, female students and professional women. The contemporary satirical representations in the press usually pictured her as an ‘unladylike’ character - either riding a bicycle, smoking a cigarette or enjoying typically male pastimes.

'The New Woman and Her Bicycle' from 1895 edition of Puck Magazine showing servants, nurses, washerwomen and widows on their bicycles.

The University College Liverpool student magazine includes many references to the ‘New Woman’ from 1894 onwards. The following epitaph centres around the traditional domestic roles of women in the kitchen making pies and tarts for her husband’s approval until she dies. The comment underneath relates directly to the ‘New Woman’ and ‘Revolted Daughters’ whose husbands and fathers were probably not able to praise their domestic abilities as they were preoccupied with more important matters including education and social reform.

An epitaph extract relating to the New Woman from November 20 1894, Issue 14 of the student magazine, Special Collections and Archives.

The Revolt of the Daughters

‘The Revolt of The Daughters’ was written by Blanche Crackanthorpe in 1894 and it centred around the right of the unmarried woman to be considered as an individual as well as a daughter. While boys were prepared for professional careers, a girl’s only option was to be prepared for marriage but she should be able to make her own errors, travel freely, visit the music hall and enjoy improved education. This new ideology influenced the students at University College Liverpool as it was one of the subjects at the women students debating society during 1894.

Richard Le Gallienne was a Liverpool born literary critic and poet and he gave a ‘The Revolt of the Daughters’ lecture in November 1894 at University College Liverpool and wrote for the student magazine in January 1895 stating:

“So when women thought of being clerks or doctors they were told it was hardly maidenly and the same cry is now against the lady cyclist…It would appear that the two things a woman of good taste may not do is to claim brains and admit legs.”

The reaction to his lecture was very mixed and might also give us an indication as to how the student play performances may have been received by their audience five months later.

An extract detailing Le Gallienne’s lecture at University College Liverpool, showing that attitudes towards the ‘New Woman’ were very mixed.*

Domestic Queens vs The New Women

A student performance entitled ‘Living Pictures' was organized to raise money for the Athletic Club in March 1895 and two of the main performances highlighted the differing perceptions and roles of women at the time and were in response to this new emerging ideology.

Left - The female performers from ‘The Queen of Hearts’ show a correlation to some of the figures that we see in ‘A New Beauty’ exhibition with their long flowing hair and graceful Pre-Raphaelite appearance. Right - Study of a Head, 1895 by Edward Coley Burne-Jones.

The ‘Queen of Hearts’ female performers were represented much like the idealised Pre-Raphaelite figures depicted in our ‘A New Beauty’ exhibition and the performance review tends to focus on their pie making skills or their appearance, stating:

“…the Queens were young and fair and were always attended by four maids of honour, selected for their beauty who wore their hair long, as hair ought to be worn...”

Left - Anning Bell’s representation of the Queen of Hearts making her pies in the student magazine, 1895. Right – an extract from the performance review echoes the pie epitaph from 1894.

The play was written by Richard Anning Bell who was a Lecturer at the School of Architecture and Applied Arts at University College from 1894 and he also supplied the first illustrated headings for the student magazine from 1895.

Interestingly, Bell’s work is also featured in our ‘A New Beauty’ exhibition and both he and Le Gallienne also contributed to ‘The Yellow Book’ that is on display. Bell’s style in his artwork and for the ‘Queen of Hearts’ play depict the romantic, ethereal and traditional characterisations of women.

In comparison, the performers involved in the ‘New Woman’ skits were all male students who performed different caricatures of women in male-led professions. A ‘Revolt of the Daughter’s’ poem was written for the performance and was accompanied by living pictures of ‘New Women.’

The photograph is entitled ‘New Women and a True Woman.’ Photograph from the student’s magazine, March 1895.

The men played characters such as “Jane Tar” which was a name that was given to female sailors (far left) and “Bobbina” (centre) who could be the feminine version of a policeman as the article quipped “from his chic helmet-bonnet to his regulation boots, it was hard to imagine a more charming damsel.” All but one of the performers has been named and we do not know who played the “True Woman” (second left) but the character may have represented more traditional values.
The performance lacked the grace showed by ‘The Queen of Hearts’ players but the reviewer stated that it was “very clever and in parts quite funny.”

The rehearsals for both of these plays had ensured that some of the more serious professors were caught laughing as they peeped in after their lectures had ended and ultimately, it appears that both of these performances were well received. They were put on by both the male and female student councils and so we can assume that the performances had been approved by both committees. Whether they were meant to remind women of their traditional roles for ‘The Queen of Hearts’ or as a derogatory slur against the ‘New Women’ at the college is unknown.

A later comedy performance in 1896 saw a male student representing the cyclist character of ‘Miss Cyanide Bloomers’ smoking and wearing masculine clothing and a student programme from 1897 shows that the female students were banned from attending the men’s Smoking Concerts.

Left – An image from the University College Student Magazine depicting a Miss Cyanide Bloomers smoking a cigarette along with part of the song performed, 1896. Right - The poster reads: “Not admitted to the SRS Smoking Concert, March 2nd 1897” with a picture of a female student in cap and gown smoking a pipe.

They hint at the possibility that some of the female students were wanting to gain equality in their extracurricular activities as well as their studies but were instead parodied and mocked by some of the male students. However, a year later in 1897, the students formed a cycling party for both sexes as it was realised that it was a pastime that was shared by all and was starting to become the norm at the college.

Left - A student magazine except from 1897 shows that equality amongst the male and female students sharing pastimes that had been strictly for men. Right - A New Woman cartoon by Michelle Keeley Adamson.

The performances may have been a form of misguided comedy whereby new ideologies and values were challenged by the comics of the day. Satire often draws a fine line when it comes to race, religion, and politics and sometimes it is only with hindsight that these views are realised as outdated or in bad taste.

It is thanks to the pioneering ‘New Women’ and ‘Revolted Daughters’ from the 1890s that we can celebrate days like #InternationalWomenInEngineeringDay and many women can enjoy the freedoms and equalities in our everyday lives including education, politics, entertainment, travel and careers that the female students in the 1890s could only dream of.

Our recent LightNight 2021 history video detailed the many different plays and performances that took place in the Victoria Building from 1892.

With thanks to Special Collections and Archives, Sydney Jones Library, The University of Liverpool for the Sphinx magazine material, PUB 3/2/1-2.

Find out more in our 'A New Beauty' exhibition.