Our popular Heritage Open Day Tours introduce visitors to several buildings that Alfred Waterhouse designed initially for University College Liverpool in the late 1880s, up until 1904 when we became The University of Liverpool.
These annual tours take our visitors into buildings that members of the public do not always get to see and this blog will give a brief overview of the Waterhouse buildings on campus.

Alfred Waterhouse was one of the 19th century’s busiest architects and had an established reputation for college and university architecture as his portfolio included buildings for Oxford and Cambridge universities. He had already completed Manchester Town Hall by 1877 and the iconic Natural History Museum in London by 1881. He had also constructed buildings for Manchester and Leeds who were the other members of The Victoria University, of which University College Liverpool was the third party.

When it was time to construct a purpose-built headquarters for University College Liverpool, this local architect born in Liverpool was the perfect choice for designing the Victoria Building and many others to follow.

Our Heritage Open Day tours begin outside the VG&M and briefly touch upon the building’s architecture and history. Our knowledgeable guides conduct regular guided tours that go into a lot more detail about the Victoria Building and so visitors are encouraged to come back and attend one of these tours separately.

Completed in 1892, the Victoria Building combined architectural drama with practicality.  Gothic Revival flourished from 1830-1900 and it represented the perfect marriage of spiritual and artistic values. Designs were based on forms and patterns from the Middle Ages and architectural features included pointed arches, steep sloping roof, steeples, decorative tracery on the windows and medieval motifs like roses. Windows often feature quatrefoils in the tracery, were usually filled with stained glass and are subdivided by mullion (vertical bars of stone).

There are some lovely features to the exterior of the VG&M which are pointed out on the Heritage Open Day tour including the following points of interest: 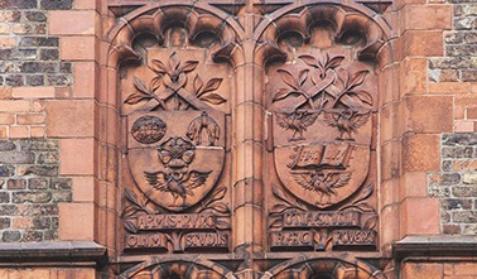 Sculpture on the exterior of the Victoria Building - The Victoria University Coat of Arms representing the three northern colleges (left crest) and the University of Liverpool crest on the right.

Left - Owen's College Manchester and Right - The Victoria Building, both part of The Victoria University & designed by Alfred Waterhouse.

Secrets in the Soil

The Quadrangle, the site of the Asylum Building that was renovated by Waterhouse in 1881.

Behind the VG&M is the Quadrangle and the next location for a building connected to Waterhouse and although the building no longer stands we know that the foundations of an old asylum building lie beneath the surface.

This grassy area in the centre is the site of one of the first buildings that Waterhouse converted in the late 1880s. The old building was purchased by University College Liverpool in 1881 and Waterhouse’s conversion cost £20,000, opening to students a year later in 1882. Although we do not have many photographs of the building, we do have the conversion plans that show where different departments were located.

As student numbers increased it became clear that the renovated asylum was not adequate and only ten years later in 1892, the Victoria Building was constructed, once again by Waterhouse and served as the main hub for the University. The asylum building was used by various departments until 1914 and was demolished not long after. Read more about the Asylum in a previous blog

The converted Asylum building just before demolition in 1914. 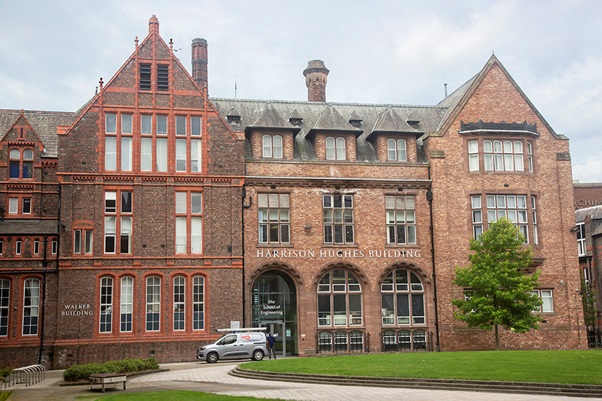 While the renovated asylum was being used by University College in the late 1880s, the first building that was specifically constructed for the college were The Walker Engineering Laboratories. Opening in 1889 and built in commemoration for Queen Victoria’s Golden Jubilee, the building was financed by Sir Andrew Barclay Walker. 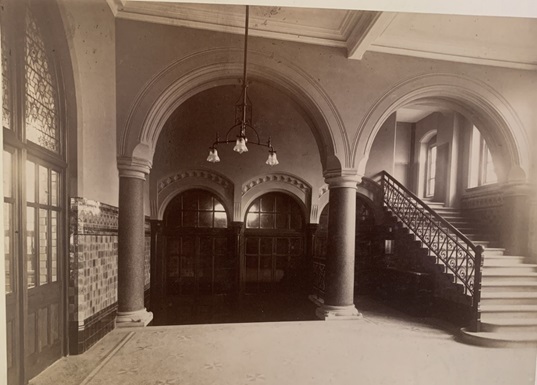 Interior of The Walker Engineering Laboratories circa 1889.

It has a simple design in comparison to the Victoria Building which would be constructed a few years later, but you can see similarities between the two including the faience tiles, columns and stained glass on the interior and terracotta and red brick on the exterior.

The Harrison Hughes Building next door was opened in 1912 and constructed by Briggs, Wolstenhome and Thornley in a gothic design using brick and sandstone, which echoes a similar style to Waterhouse. The building was damaged during WWII and later rebuilt and so you can see a difference in the stone used at the corner of the building. 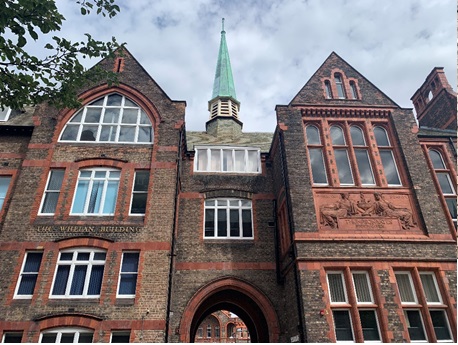 Although toned down in its gothic style when compared to the Victoria Building, it is once again constructed from brick and terracotta with a terracotta plaque added by sculptor C. J. Allen. The two figures are classicised representations of Physiology and Pathology which were the subjects to be taught in the new building. The figures are said to be modelled on Mrs Sherrington and Mrs Boyce who were the wives of the professors who taught these subjects.  Although the building was originally opened for Physiology and Pathology it is currently used by the School of Veterinary Science. 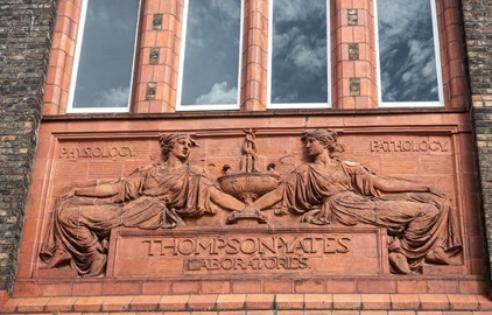 The terracotta panel modelled on Mrs Sherrington and Mrs Boyce

The interior of this building is a lot more understated than the Victoria Building and although Waterhouse used yellow Burmantoffs tiles on the stairway columns, the rendering on the walls is very plain with very minimal tile decoration. 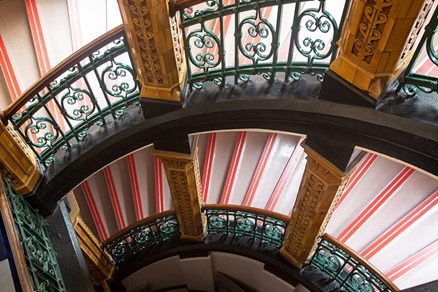 Thompson Yates staircase is the most decorative part of the building.

Next door is the Whelan Building which was also constructed by Waterhouse and was built for the Medical School, opening in 1904. The external features on this building show the semi-circular lecture theatres that were housed inside and once again we see the redbrick, gothic architectural style that Waterhouse was known for. The interior of this building is even plainer than its neighbour and the simple, muted tiles reflect some of the tiles seen in the first-floor corridors of the Victoria Building. 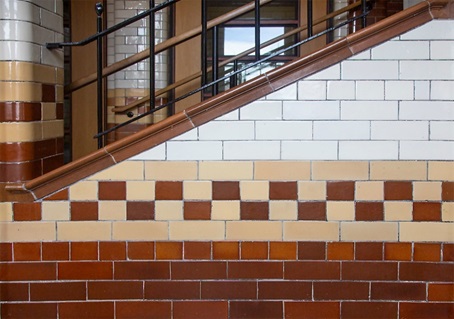 Both the Thompson Yates and the Whelan buildings were built for education and learning rather than as a showpiece like the Victoria Building was.

Other buildings in the quadrangle show how different architectural styles came into fashion after the Waterhouse buildings were constructed.

The Johnston and Holt Buildings (left) and Ashton Building (right)

The Johnston and George Holt Buildings were opened in 1904 and the Ashton Building was opened in 1914. Classical styles became a lot more favourable and the gothic redbrick designs were gradually replaced by stylised marble columns, classical figures and art deco motifs.

In fact, Charles Reilly who became Professor of Architecture at the University of Liverpool in 1904 detested Waterhouse’s Neo Gothic style and referred to the redbrick building as ‘mud and blood’ architecture and his own building faces the VG&M directly opposite in stark contrast. 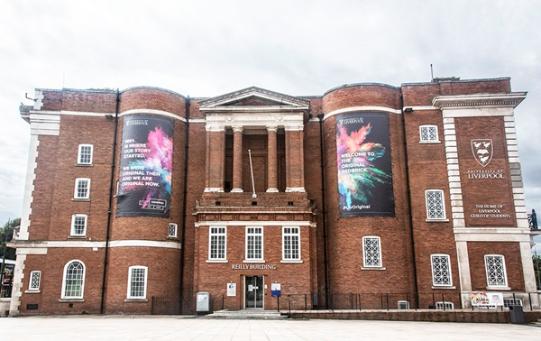 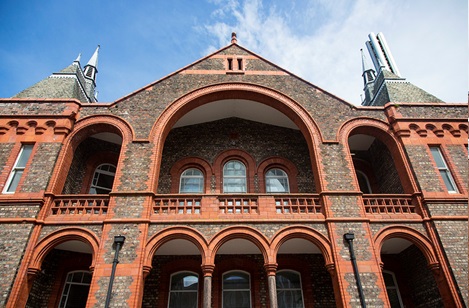 Our Heritage Open Day tours then lead visitors under the archway between the Whelan and Thompson Yates Buildings towards the Old Royal Infirmary which was constructed by Waterhouse between 1887-1890. This was Liverpool’s third purpose-built infirmary.

The three different architectural styles of the Royal Infirmary hospitals

The infirmary is also built in redbrick but displays both neo-Romanesque and Gothic styles with grey brick walls and dressings in red Ruabon terracotta. Waterhouse was strongly influenced by German Romanesque design and he made many trips to Germany where terracotta had already been widely used as a decorative feature of civic buildings. The Nightingale ward plan was used and women were on the first floor of the building and the men on the second floor. Six ward blocks branch north to south from a spine corridor running west to east and the south wards end with arcaded balconies flanked by towers.

Circular ward circa 2020 (left) and the ward when it was a hospital (right).

Florence Nightingale encouraged Waterhouse to include 8 pavilion wards, which later became known as Nightingale wards. She also had input into window placement and the number of beds in each ward which ensured sufficient daylight and ventilation around the room. These long wards no longer exist today, all the fire place areas are now blocked in by walls on both sides and the last ones were blocked in during a refurbishment in 2017. Waterhouse also included circular wards that he had seen at Antwerp and they were also preferential for this particular site because the Infirmary did not own the whole site bound by Pembroke Place, Brownlow Street, Ashton Street and Dover Street and so their design fit in with the land that they had available.

The corridors in the old royal are very similar to those on the first and ground floors of the VG&M with very plain glazed tiles which were easy to maintain and keep clean. The Spine corridors were strictly utilitarian in style, showing the lack of mouldings and hygienic use of easily cleaned continuous terrazzo floors as Waterhouse would usually create borders of mosaic for his floors as in the Victoria Building (photo of VG&M), the grout however would harbour dirt in a hospital setting. 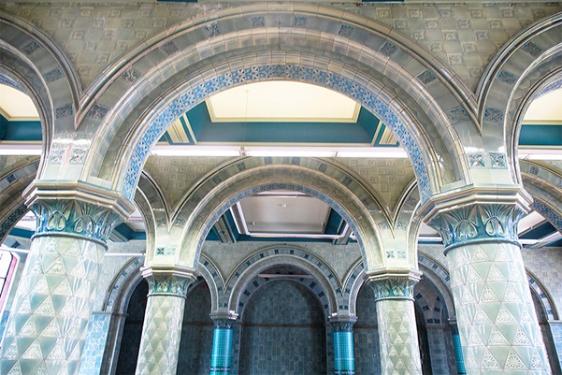 The grade II listed chapel at the west end of the spine corridor has a nave and aisles and is decorated once again by beautiful turquoise and green tiles from Burmantofts. The colour scheme that has been used in this space provides a serene and restful environment and the colour invokes feelings of sympathy, compassion, peace, trust and calm and is a suitable choice for reflecting the wellbeing of the spirit, as well as the body, in a hospital chapel.

Floral motifs on the tiles and cross shapes in the mosaics feature heavily within this space and the arts and crafts movement often used stylised motifs from nature such as flowers, plants and symbols from the Bible which are in keeping with chapel spaces like this one. 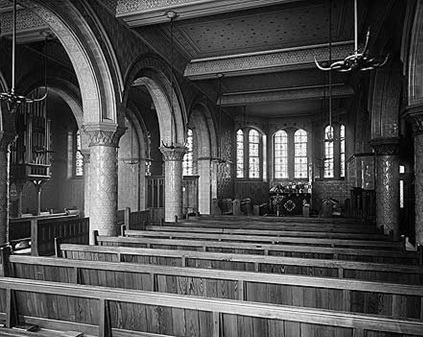 This chapel was left derelict for many years until the University took over the Waterhouse blocks of the infirmary and chapel in 1995 to turn them into departmental offices and conference spaces for the university. Today, the chapel is available to hire for conferences and events and can sit up to 140 people in a theatre style.

There are many beautiful buildings on the University of Liverpool campus and this tour has only touched very briefly upon the Waterhouse buildings and surrounding university buildings over on the north side of campus.

There are also many other Waterhouse buildings in Liverpool such as the Great North Western Hotel next to Lime Street Station and the Prudential Assurance building.

The Heritage Open Day tours book up very quickly but we do have video tours on the VG&M YouTube channel that you can watch at home if you don’t manage to book a place on the tour this year and don’t forget to book onto a guided tour at the VG&M every Tuesday at 2:00pm.