A Snippet of India

Pictured above is one of a series of thirty photographs depicting Indian landscapes and buildings within the collection at the VG&M. This collection, previously unresearched, demonstrates a snapshot into Indian architecture and landscapes in the late Victorian period. 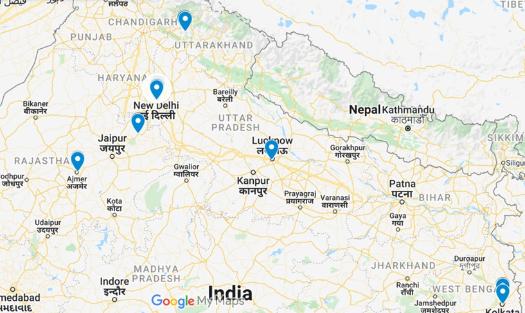 Map pin-pointing the various locations of these photographs.

We have been able to locate the buildings from twenty-four of the thirty photographs and discovered that they cover a range of locations concentrated in the Northern regions of India; these include Delhi, Landour and Mussoorie and Alwar. The photos depict a variety of buildings ranging from tombs, mosques, government buildings, as well as rural landscapes taken c. 1860-1870. We believe that at least some of these images were taken by professional photography studios, including R. Ritter & Molkenteller Co., John Saché, and Samuel Bourne through studying their stamps and signatures (and in the case of Saché, comparison with his known works).

Within the collection of pictures are those depicting the dargahs (tombs) in Nizamuddin, Delhi. Included in this is the tomb of Princess Jahanara Begum (b.1614 – d.1681), the eldest daughter of the Mughal Emperor Shah Jahan. Begum had significant power and influence during her lifetime and did not restrict herself to living in a harem, as expected of women during this period. She was the Padshah Begum (First Lady) of the Mughal Empire and was entrusted with the imperial royal seal. She enjoyed considerable influence in court, especially over her father's successor, Emperor Aurangzeb. Begum was also a philanthropist who donated large sums to organise almsgiving and famine relief.  She supported arts and culture, was an avid follower of Sufism and sponsored the construction of the Jama Masjid (one of the largest mosques in India). In terms of financial power she was given control of the revenues of the port of Surat and owned her own ship, the Sahibi, which transported cargo and pilgrims from Surat to Mecca. Begum was an influential force within the Mughal empire and her tomb resides next to the dargahs of Sufi saint Nizamuddin Auliya and Amir Khusrow, his disciple. The site is visited by thousands each week and hosts qawwali (Sufi Islamic devotional singing) sessions. 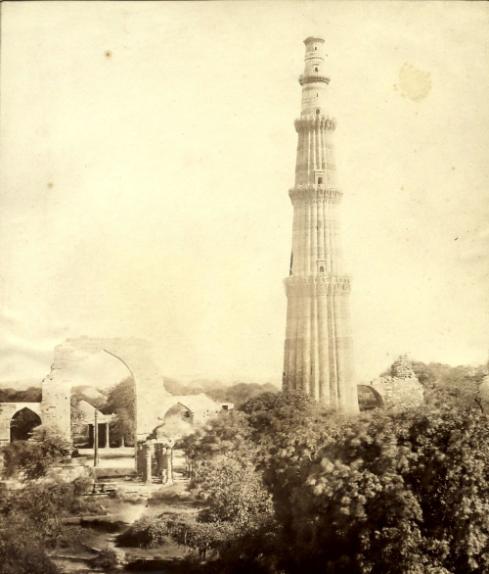 Qutb Minar minaret from within the Qutb Minar Complex, Delhi.

The series also features a significant number of photographs of the Qutb Minar complex in Delhi. This photograph shows the Qutb Minar, the tallest minaret in the world to be built from bricks, reaching a height of 72.5m tall. The tower was constructed as a symbol of traditional Islamic architecture and was built c. 1192 by Qutb-ud-din Aiback, the first ruler of the Delhi Sultanate. The Qutb Minar was constructed as a victory tower and a symbol of Muslim dominance over India. In 1993 the minaret became a UNESCO World Heritage site that is visited by millions of visitors annually.

In the background the Islamic arches that can be seen form part of the original Quwwat-ul-Islam Mosque, the first mosque built within Delhi (c. 1193). The arches were built simultaneously to the Qutb Minar. Additionally, the Iron Pillar of Delhi, famous for its resistance to corrosion, is visible. This pillar stands 7m tall and was originally constructed by Chandragupta II during the 5th century in dedication to the Hindu deity, Vishnu. The Qutb Minar complex is a site of historical significance illustrating Islamic architecture and the influence of Muslim rule in India. 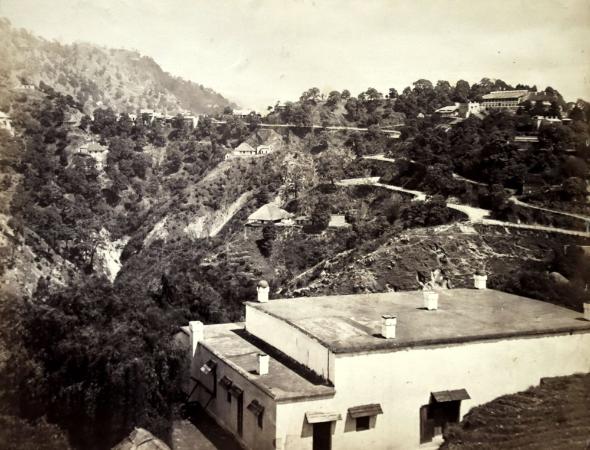 Views of the Landour hills landscape, with building in foreground labelled as 'Mr Wittenbaker's house'.

Furthermore, the photographs also demonstrate the sweeping mountainous views that dominate the Indian landscape. This image was captured in Landour, Mussoorie, a small town in the Dehradun district of India which is home to part of the Himalayan mountains. Landour was initially established as a hill station for the British Indian Army during the British Raj era, acting as a cantonment. A small inscription on the lower right side of the photograph identifies that the building in front was owned by a ‘Mr Wittenbaker’, however, little is known about him. 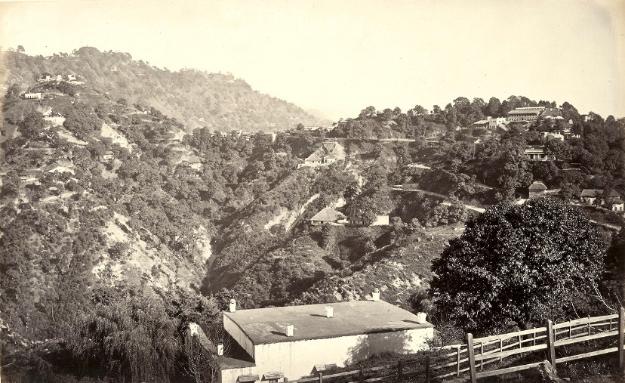 Similar view of Landour landscape from an alternative position, from Art Gallery of Ontario.

Using the Art Gallery of Ontario's archive we have been able to compare and identify an exceptionally similar photograph to the one within our series. This image depicts the same scene yet captured from a different angle. Taken by Samuel Bourne in 1866, as part of his Himalayan photography collection, this image confirms our research, the caption helps to further identify the location. It has been described to have been taken from Camel’s Back, a 3km stretch of road built in 1845 as a walking trail for visitors to see the Himalayan views. It identifies the building on top of the hill, in the right-hand side background, as ‘The Club’ a building that also features in another photo within the collection at the VG&M. 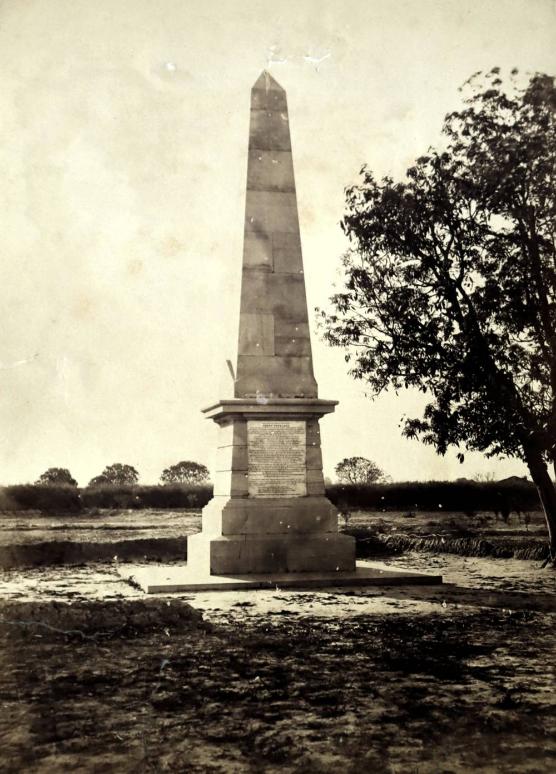 However, while many photographs in the collection have emphasised the scale and beauty of Indian-built monuments and structures, this memorial headstone illustrates the crueller side of Indian history during British occupation. The monument is located in Lucknow and is dedicated to Major-General Sir Henry Havelock (b. 1797 – d.1857), a British General who was involved in the recapturing of land during the Indian Rebellion of 1857, an uprising against the rule of the British East India Company that threatened their power in the region. Havelock was involved in the suppression of disturbances and rebel forces in various battles, defending Lucknow during its besiegement. He died of dysentery days after the siege of Lucknow was lifted and his military campaign became successful. The monument shown in the image was erected by his sons and widow in his honour.

British colonialism in India was an influential force that altered the Indian consciousness due to its exploitation. The inclusion of Havelock’s monument within this collection is a reminder of this influence and the suppression of Indian voices against forces of oppression.

Jama Masjid with a crowd of worshippers.

This can also be witnessed in the history of religious buildings in India. The Jama Masjid was featured within the debate of the use of mosques by the rebel movement. The Jama Masjid is one of the largest mosques in India and was built by Mughal Emperor Shah Jahan between 1650-1656. It served as the imperial mosque until the collapse of the Mughal Empire due to the revolt in 1857. The British forces believed the rebellion had been instigated by Muslims and cultivated in Delhi’s mosques. Consequently, the Jama Masjid was confiscated by the British and barred from religious use. After its return to the Muslim population in 1862 the Jama Masjid was given special protection as a religious space under the Religious Endowment Act of 1863. This prevented any British action concerned with the squashing of political activities in public spaces.

Religious institutions, like the Jama Masjid, provided a safe space for those seeking to discuss anti-colonial sentiments, as the 1863 Act provided protection against any quelling of political disturbances. Therefore, the Jama Masjid has a multi-faceted influence in Indian culture as a religious and political symbol, and its inclusion within this collection illustrates this. Today, this site serves as a significant place of worship to a large congregation as well as still being an influential political site, notably used to hold protests against U.S. bombings in Afghanistan following the 9/11 attacks in 2001.

The buildings and landscapes depicted in these photographs exemplify a dual narrative of Indian history. One revealing the grand and luxurious religious architecture influenced by Islamic and Mughal era ideas of victory and power and the other providing insight into the turbulent colonial history orchestrated behind the walls of these buildings and landscapes. It is worth noting that similar images are held in Special Collections and Archives that also show Indian architecture and cultural life during the later period of 1909-1910. Altogether, these photographs help illustrate the role of Indian politics and power against colonial influence whist also revealing the natural beauty of India’s landscapes and architecture.