The History of the Victoria Building

Opened in May 2008 by HRH The Princess Royal this Grade II listed building, designed by Alfred Waterhouse has been a central part of University life for over a century. As a celebration of Liverpool’s year as European Capital of Culture, the building has been carefully renovated and transformed into a public venue for all to enjoy.

The history behind the building is just as interesting as the treasures it contains.

In 1882 University College, Liverpool opened its doors to 45 students. Based initially in the disused lunatic asylum on Ashton Street, the College rapidly grew and it was not long before the inadequacies of the building became apparent.

In 1887, the year of Queen Victoria’s Golden Jubilee, the College launched a fundraising appeal for the erection of a purpose-built headquarters. The College’s Council asked Liverpool-born architect Alfred Waterhouse, to draw up plans.

With the building costed at £35,000, the fundraising appeal relied heavily on the generosity of the people of the city. By 1888 the College had received £16,000. The Liverpool Jubilee Memorial Committee donated a further £4,300 for a commemorative clock tower, Mr (later Sir) William Hartley, the jam manufacturer, funded the clock and bells and Mr (later Sir) Henry Tate, the sugar refiner of Liverpool and London offered to fund the entire library block of the building, amounting to £20,000.

Ordinary bricks and terracotta dressings were selected for the Gothic exterior, which led to the coining of the phrase ‘red brick university’ by Bruce Truscot, the pseudonym adopted by Edgar Allison Peers, a Professor of Spanish at Liverpool (1922 – 1952), who wrote an influential book of the same title about universities originating in the 19th century.

The interior was finished to a similarly high standard. The entrance hall was elaborately decorated with faience of terracotta, turquoise and buff glazed tiles, while corridors were lined with glazed ivory and brown bricks, divided into bays by arches. Additions such as electric lighting were ahead of their time for buildings of that period.

Delays in construction resulted in the cancellation of an opening by the Prince of Wales in June 1892, but it was finally officially opened on 13 December 1892 by the Chancellor of the federal Victoria University, Lord Spencer.

Life in the Victoria Building

From 1892 onwards, the building was the heart of University life. Besides administration offices it housed a lecture theatre, lecture rooms, staff offices, common rooms and the Tate Library, which was designed to hold 80,000 volumes.

Gradually, as the University grew and more properties were acquired - principally on Abercromby Square - maturing departments moved out of the Victoria Building to ease the mounting pressure on accommodation. Over time, the building’s principal function was to house the University’s administration.

The Tate Library served as the University’s main library until the opening of the Harold Cohen Library in 1938. The space, renamed Tate Hall, became home to some of the University’s art collections and was often used for formal events and as an examination room.

The Leggate Theatre, though primarily a teaching venue, hosted a number of concerts, Guild meetings, plays and guest lectures from notable figures such as writer Hilaire Belloc, poet and novelist Walter de la Mare, composer Gustav Holst, classical scholar Gilbert Murray and Academy Award-winning actor Peter Ustinov. The University’s inaugural lectures, which continue to this day and are delivered by professors appointed to endowed chairs in the University, were also held in the lecture theatre. Described by commentators as what could be  “Liverpool’s greatest legacy from the European Capital of Culture”, the Victoria Gallery & Museum is the University’s legacy to the people of Liverpool.

Officially opened by HRH The Princess Royal, The Victoria Gallery & Museum has evolved from what was a generous gift from the people of Liverpool into an impressive public visitor attraction. And just as in the late  nineteenth century, so today the University enjoys the patronage of people near and far and is grateful to many individuals, trusts, foundations and companies for their support.

The Gothic style, elaborate brickwork, the stunning Italian mosaic paving interior and traditional Victorian tiles work together to give this magnificent building the wow-factor. And following major restoration work in July 2008, at a cost of £8.6 million, this building is now open to everyone as the VG&M one of the most unique Liverpool museums and art galleries.

Discover more on our Virtual Tours

Visit our Interactive Tour page to find out fascinating facts about the Victoria Building.

Watch our history videos on the VG&M YouTube channel

Have a story to tell?

Do you remember studying or working in the Victoria Building? We'd love to hear your story and see your photographs of our building from over the years!

The Grand Entrance Hall, circa 1892

The Arts Lecture Theatre, circa 1892

The Tate Library circa 1930s 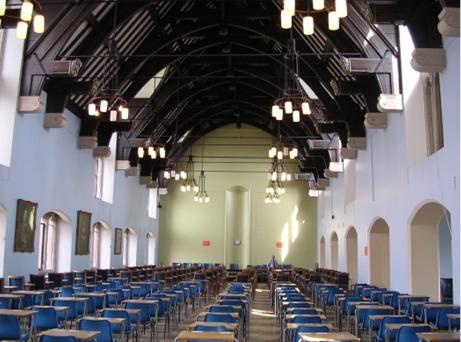 The Tate Hall set up for examinations circa 2004