We've got the VG&M Blues

Did you know that the famous original red brick university building which houses our magnificent gallery & museum is actually – in parts – blue?

The discovery was made during remedial works that took place last year (do you remember the scaffold we had up during the summer?) and on closer inspection it seems that underneath the terracotta veneer, some of the bricks actually have a sort of blueish tinge! 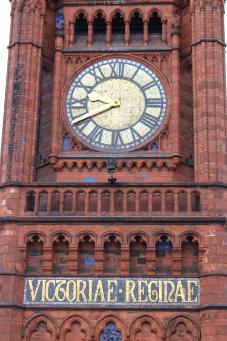 Contractors working on the building alerted staff at the VG&M to the anomaly whilst working on the roof. It is suspected that some sort of reaction to the manganese dioxide (a colouring agent used in brick manufacture) has occurred with rainwater over the years. It could also be that some of the bricks used have been Class A engineering bricks which are fired at a higher temperature and have been mixed up in the bricks when originally constructing the building.

It is said that historically, the Professor of Architecture at the University of Liverpool in 1904, Charles Reilly, did not like the ‘red brick’ appearance, calling it ‘mud and blood’ and saying that the bricks were the colour of curry powder. We wonder what he would have made of this little discovery!

So far, the discovery has been limited to bricks higher up on the building, which would go mainly unnoticed by the general public. But an expert consulted when we sent a sample of the brick away for testing says that it is “completely plausible” that within the next 100 years, it could be discovered that the Original Red Brick University is completely blue underneath!

A close up of the clock tower and the blue bricks

Head of Museums and Galleries, Nicola Euston said “Can you imagine the outrage if the Original Red Brick flagship building at the University of Liverpool has actually been blue all this time?

Check the date, people. Look at that close-up picture. OF COURSE IT’S AN APRIL FOOL!”

If you have enjoyed our little #FakeNews prank, don’t give the game away.

Go back to the Facebook/Twitter post, leave a comment or message saying how shocked you are and like and share. Let’s see how many people we can catch out! We’ll come clean at 12 o’ clock.