Sometimes nature unleashes forces that humans cannot control like volcanoes, wild gales or global pandemics. At the same time, we are increasingly aware of the ways that humans impact negatively on the environment.

This exhibition features artworks illustrating the ever-present tensions between the natural world and the human race.

360 tour of the exhibition 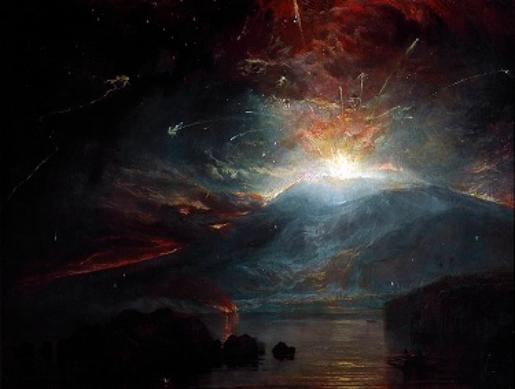 Although nowadays they can often be predicted, volcanic eruptions still cannot be prevented. Their lava and ash plumes causing disruption, destruction and sometimes death.
Turner painted this graphic imagining of a famous volcanic eruption from the safety of his studio in 1815. He based it on a sketch by Hugh Perry Keane, a lawyer and plantation owner on the Caribbean island.
St Vincent was a key location for sugar production using enslaved African labour. It is recorded that much of the ‘slave village’ was destroyed during the eruption and 34 of the 239 enslaved people on the island died.
FA.459  Presented by Raymond Richards, 1948
Abandoning the Circassion, 1835
By Clarkson Stanfield (1793 – 1867)
(Watercolour)
This painting was created for a book illustration in 1835. It shows a fictional ship called the Circassion being wrecked in a sea storm. But, by horrible coincidence, a real ship with the
same name suffered that fate in 1876.
Circassion sailed from New York for Liverpool carrying an industrial cargo and a mostly Liverpool crew. A blizzard struck off Long Island and the ship foundered on a sandbank. The crew were rescued and a salvage operation ordered for the cargo. A team of Long Island men including members of the Shinnecock Tribe plus some crew boarded the ship and started to unload. Another storm erupted too fierce to launch a rescue. When the storm abated three of the Liverpool crew had survived but all 29 others in the salvage team had died.
On loan from The Atkinson, Southport 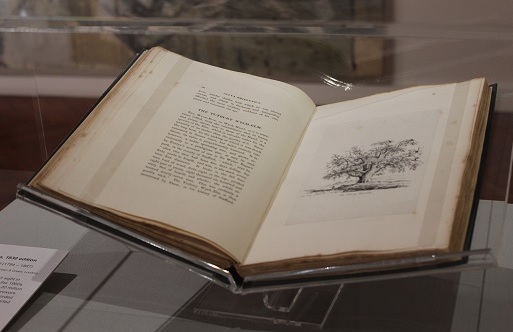 Majestic elm trees were a common sight in Britain until they were decimated in the 1960s and ‘70s by Dutch elm disease. Over 20 million trees died leaving only a few mature survivors. Outbreaks of elm disease have been recorded since the 1820s but it is believed logs imported from Canada in the 1960s brought a more aggressive strain. Despite scientific research, no remedy has yet been found for the fungal disease which is spread by elm bark beetles.
Strutt first produced this celebration of famous British trees in 1826. Its full title is Sylva Britannica; or Portraits of Forest Trees distinguished for their Antiquity, Magnitude or Beauty, Drawn from Nature. Sadly, it is thought none of the elms mentioned in his book have survived.
On loan from The Atkinson, Southport 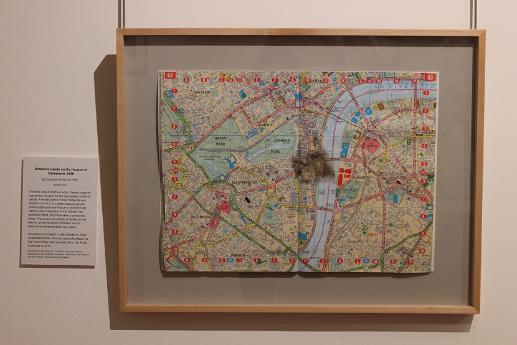 Meteorite Lands on the Houses of Parliament, 1998
By Cornelia Parker (b.1956)
(Mixed media)

With this dryly humorous work, Parker imagines a potential scenario for the apocalyptic power of nature. A heated piece of real meteorite was placed on an A-Z of London causing a burn-mark to obliterate the Palace of Westminster. Parker used a fragment of the Gibeon iron meteorite which fell in Namibia in prehistoric times. This is one of a series of works on the theme, when the artist’s ambition was to relaunch a meteorite back into space.
Cheshire-born Parker is one of Britain’s most celebrated artists. She has been shortlisted for the Turner Prize and was elected to the Royal Academy in 2010.
On loan from The Atkinson, Southport. Acquired with the assistance of the ACE/V&A Purchase Grant Fund, the Art Fund and the Friends of the Atkinson Art Gallery.
Bus Stop, 1974
By Kelvin John Crump
(Oil on board)
The artist presents an urban scene as though glimpsed through a basement-level window. To the right, a waste-bin nestles next to a lamp-post. To the left, a woman wearing red shoes waits at the bus stop. In the middle of it all stands a lone tree engulfed by the man-made terrain, but defiantly pushing back at the pavement.
This painting was exhibited at the John Moores Painting Prize Exhibition at the Walker Art Gallery in 1974. We know nothing about the artist, so please tell us if you have any information about him.
FA. 806      Purchased in 1974 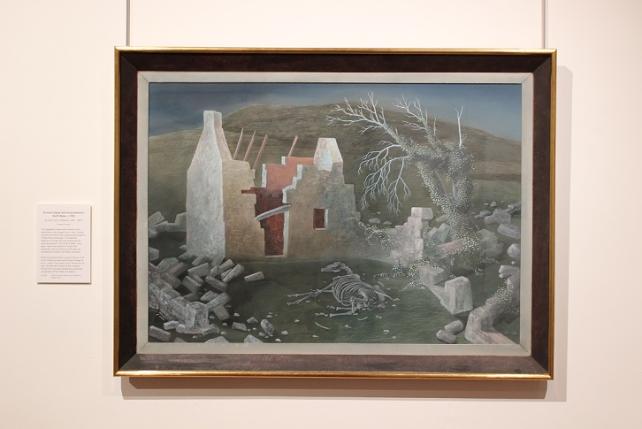 This apparently bleak scene shows a long abandoned rural cottage now in ruins. Its pale, tumbling stonework has a spectral glow against a featureless landscape. The bleached skeletons of horse and tree emphasise the eerie atmosphere. Yet not all is dead. Once again nature has started to reclaim the landscape, with ivy twining up the tree and spreading its tendrils over fallen stonework.
Witherop studied at the Liverpool School of Art in the 1920s and later at the Royal College of Art in London, then spent time in Rome and St Ives. He returned to teach at the Liverpool School of Art and also worked as a paintings’ conservator at the Walker Art Gallery.
FA.2088 Gift of the artist’s estate via the Walker Art Gallery, 1984 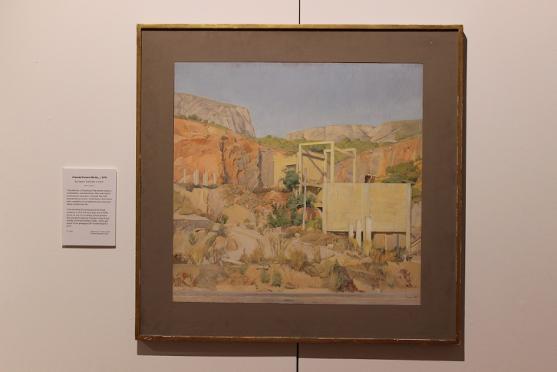 Disused Cement Works, c.1976
By Daphne Todd OBE (b.1947)
(Oil on canvas)
The bleached, arid setting of the cement works is Castelldefels, near Barcelona. After scarring the landscape for excavation, the plant has been abandoned by humans. Todd shows it at the point when vegetation is just starting to grow back and nature re-claim the site.
Todd exhibited this landscape at the Royal Academy in 1976 but these days she is better known as one of our leading portrait painters.  She was the first female President of the Royal Society of Portrait Painters (1994 – 2000) and winner of the prestigious BP Portrait Award in 2010.
FA. 3283   Gift from the Trustees of the
Chantrey Bequest in 2002 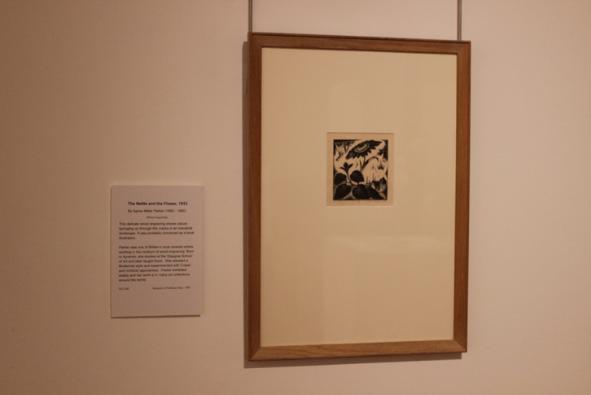 The Nettle and the Flower, 1933
By Agnes Miller Parker (1895 - 1980)
(Wood engraving)
This delicate wood engraving shows nature springing up through the cracks in an industrial landscape. It was probably conceived as a book illustration.
Parker was one of Britain’s most revered artists working in the medium of wood engraving. Born in Ayrshire, she studied at the Glasgow School of Art and later taught there.  She adopted a Modernist style and experimented with Cubist and Vorticist approaches.  Parker exhibited widely and her work is in many art collections around the world.
FA.3140   Bequest of Professor Muir, 1997 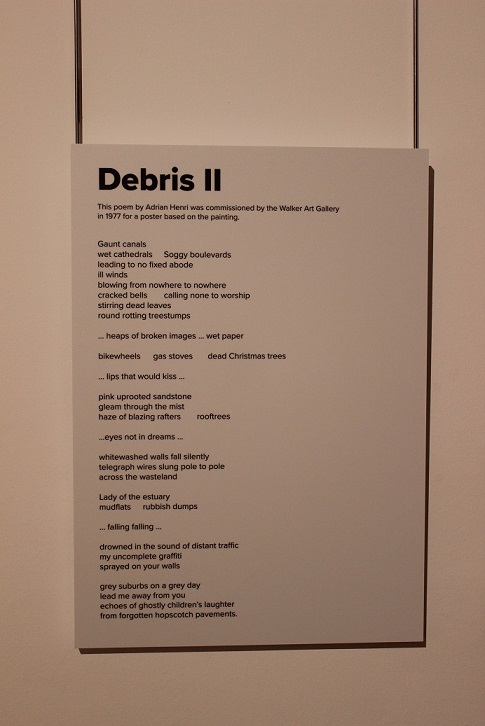 Debris II, 1975
By Adrian Henri (1932 – 2000)
(Acrylic on panel)
Henri was an influential Liverpool poet and painter, very much part of the city’s cultural profile from the 1960s onwards. Here Henri laments the destruction, as he saw it, of Merseyside’s built environment by unsympathetic town planners. He explained:
“Debris is what Liverpool children, improbably, call demolition sites; my paintings of these began as a conscious protest against civic vandalism”.
Henri painted this work for an exhibition held at the Walker Art Gallery in 1975 called ‘The Face of Merseyside’. A poem he wrote to go with the painting is displayed nearby.
Debris II - Audio MP3 for 'Debris II' poem
FA. 1369      Purchased in 1977
Coronavirus, 2020
By Helen Birnbaum
(Glazed ceramic)

Award-winning ceramicist Helen Birnbaum explores the strangely beautiful world of microbes and the cultural significance of epidemics. These Coronavirus sculptures were made in remembrance of those we have recently lost to the disease.
Based in Lancashire, Helen has exhibited in London, Cambridge, Liverpool and Basel. In 2018 she won the Victoria & Albert Museum/Morley Gallery Ceramic prize and has been resident Ceramic Artist at Liverpool Hope University.
For more information visit:
Helenbirnbaumceramics.com
Significantbunchofviruses.wordpress.com
On loan from the artist
The Conflict of Man with Tides and Sands, 1960
By Peter Lanyon
(mural painted on tiles)
Photograph of the tile mural installed in Brodie Tower, which houses the University’s Department of Civil Engineering and Industrial Design. To the right is Lanyon’s original sketch for the mural.
The Conflict of Man with Tides and Sands (Sketch), 1960
By Peter Lanyon (1918 – 1964)
(Gouache on paper)
Lanyon was an important abstract artist based in Cornwall. In 1959 he was commissioned by the University to create a large mural for the Department of Civil Engineering’s building. This four-part sketch on paper was the basis of the final mural made up of 750 white tiles with the design painted on in enamel.
Lanyon was inspired by the department’s expertise in loose-boundary hydraulics. This is the study of how bodies of water, such as seas and rivers, can move solids like sand and earth. It can cause sand banks to appear after storms, or coasts to erode. The artist’s sweeping, gestural strokes conjure up the dynamic power of these natural forces.
FA. 3666 Accepted in lieu by HM Government in 2019 and allocated to the VG&M, University of Liverpool. 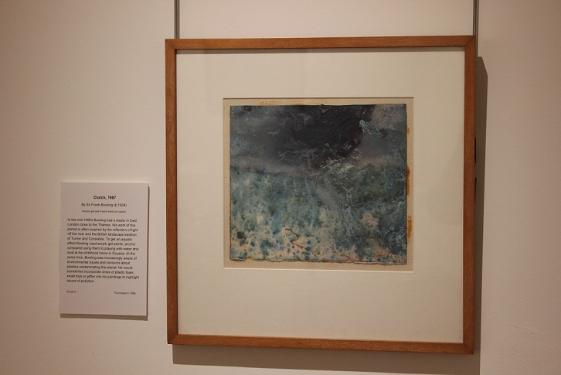 In the mid-1980s Bowling had a studio in East London close to the Thames. His work of this period is often inspired by the reflection of light off the river and the British landscape tradition of Turner and Constable. To get an aquatic effect Bowling used acrylic gel paints, and he compared using them to playing with water and mud at his childhood home in Guyana. At the same time, Bowling was increasingly aware of environmental issues and concerns about plastics contaminating the planet. He would sometimes incorporate strips of plastic foam, small toys or glitter into his paintings to highlight issues of pollution.
FA.2817      Purchased in 1988 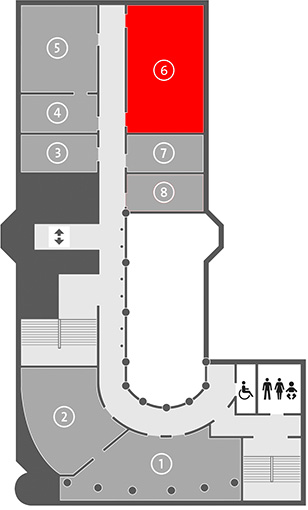